Vienna has roots with a cemetery from an early Roman settlement, Vindebona, which over centuries became a trading and cultural hub and subsequently the capital of the Austrian Habsburgs and later of Austria-Hungary. Since World War II, Vienna is the capital of the Republic of Austria. https://en.wikipedia.org/wiki/History_of_Vienna There are several iconic visitor attractions one wishes to see in this town.

St. Stephan’s Cathedral, a Romanesque and Gothic church began its life in 1137, with expansion and reconstruction continuing until 1511, and restoration projects in process to present day. https://en.wikipedia.org/wiki/St._Stephen%27s_Cathedral,_Vienna The structure has a commanding presence along the Karntnerstrasse, a pedestrian only street, along which lie many upscale shops and markets, most famous of which is Demel. https://en.wikipedia.org/wiki/Demel We had visited Demel in 2013 and enjoyed an ice coffee: coffee poured over ice cream and topped with whipped cream.

Schonbrunn, the Vienna summer residence of the Habsburgs until 1916, is a must see for anyone visiting this city. https://en.wikipedia.org/wiki/Schönbrunn_Palace To the rear of the palace are gardens leading to the Neptune Fountain and the Gloriette atop a 200 foot high hill, built by Maria Theresa in 1775 to glorify Habsburg power. To the sides of the central gardens are an arboretum, animal park, a maze, and a palm house.

Tauck brings its guests to another palace, built in the 18th century, the Palais Pallavicini of a Neoclassical style This nobleman’s residence was not damaged by war, http://www.palais-pallavicini.at/en/index.html , and is within walking distance of the Albertina Platz, and the Hofburg Palace, the winter palace of the Habsburgs. The Albertina Platz is also the meeting point for us to catch the coach back to the boat.

On arrival at Schonbrunn Castle, we were taken to see a marionette demonstration at a dedicated theater put on by an operator who had 3 decades of experience manipulating some 30 strings per character. We watched an excerpt from Mozart’s “The Magic Flute”. 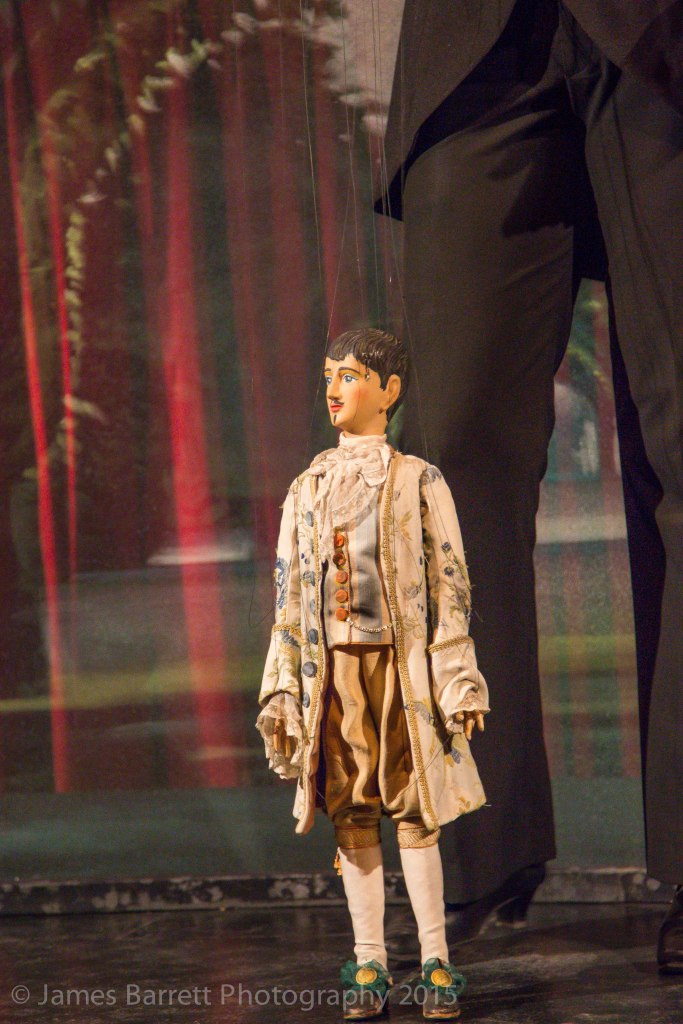 This frame shows more clearly the many strings required to simulate natural motion. In the background is seen the computer which generates the music to accompany the action.

This train is available for tours of the extensive grounds. 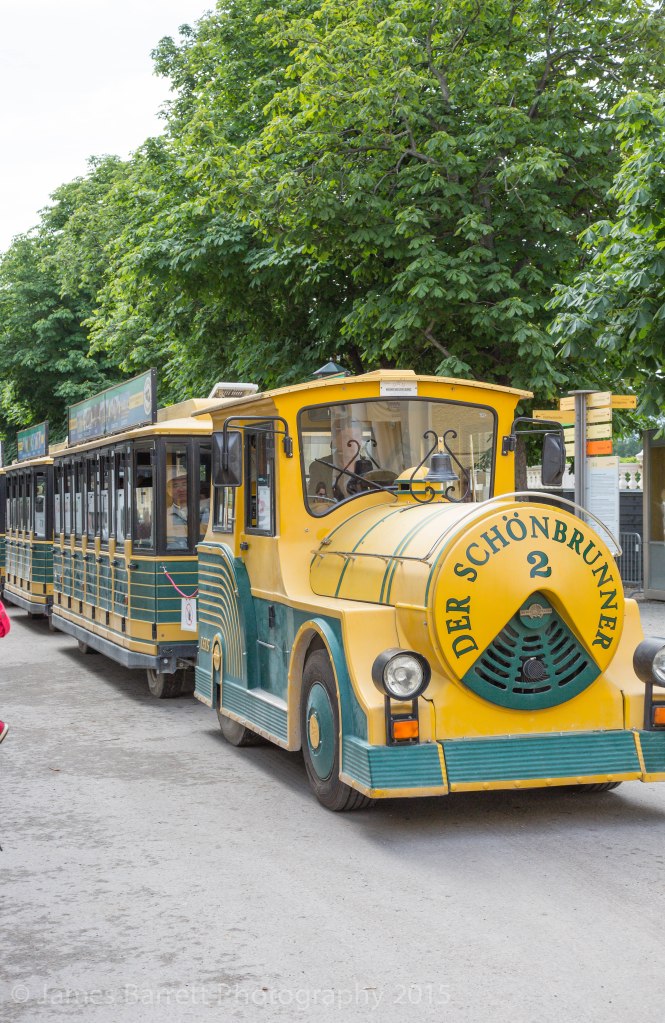 This is a tree trimming guide assisting a consistent cutting pattern. 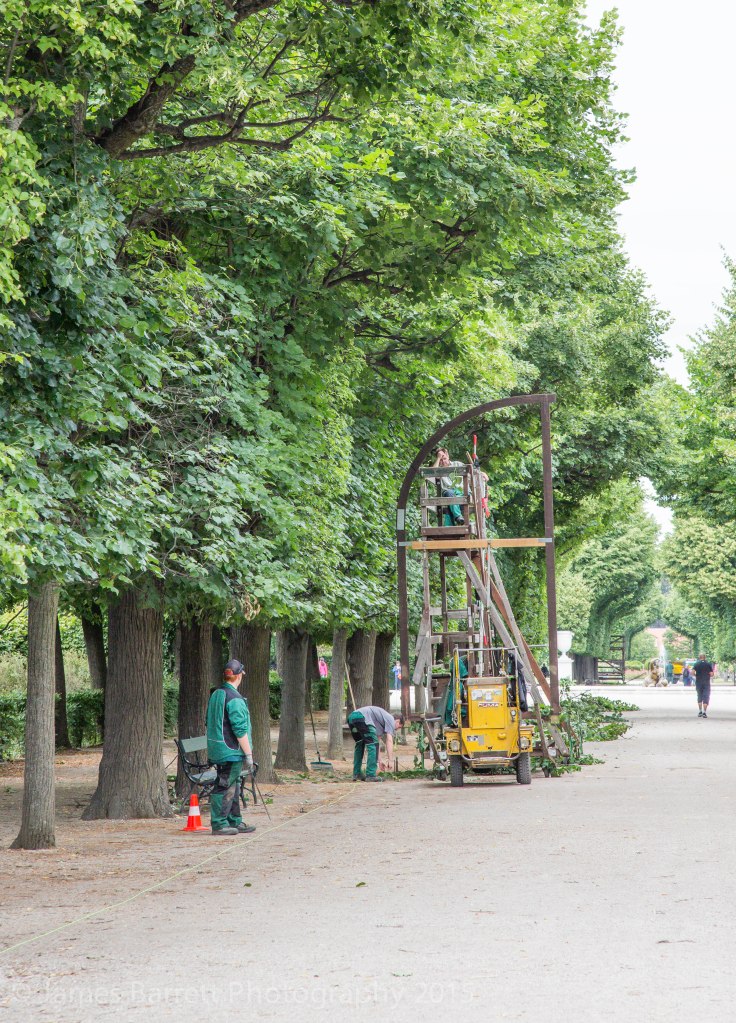 The Schoenbrunn Palace from the rear. 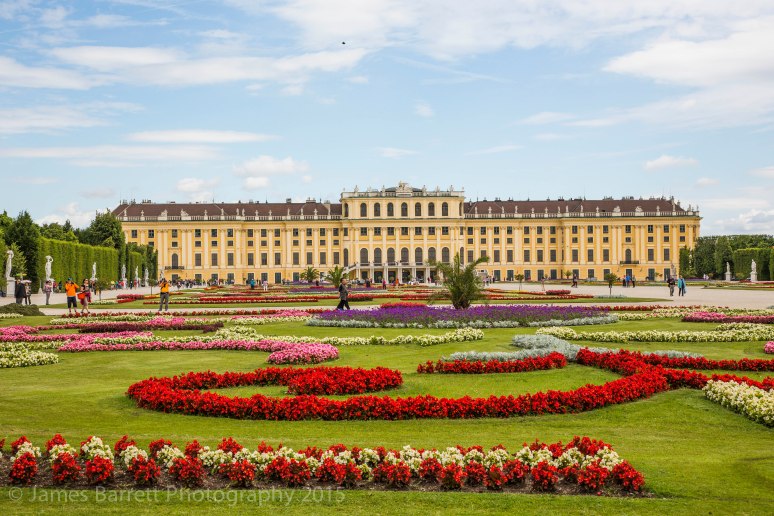 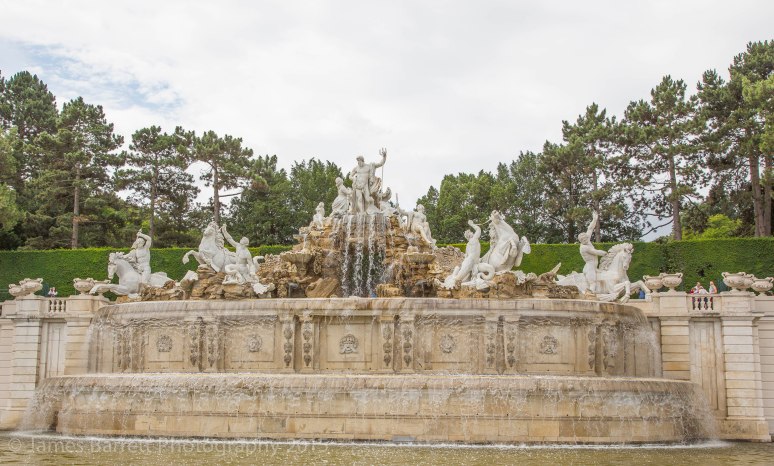 Not seen here is the penitant expression in the maiden’s eyes. 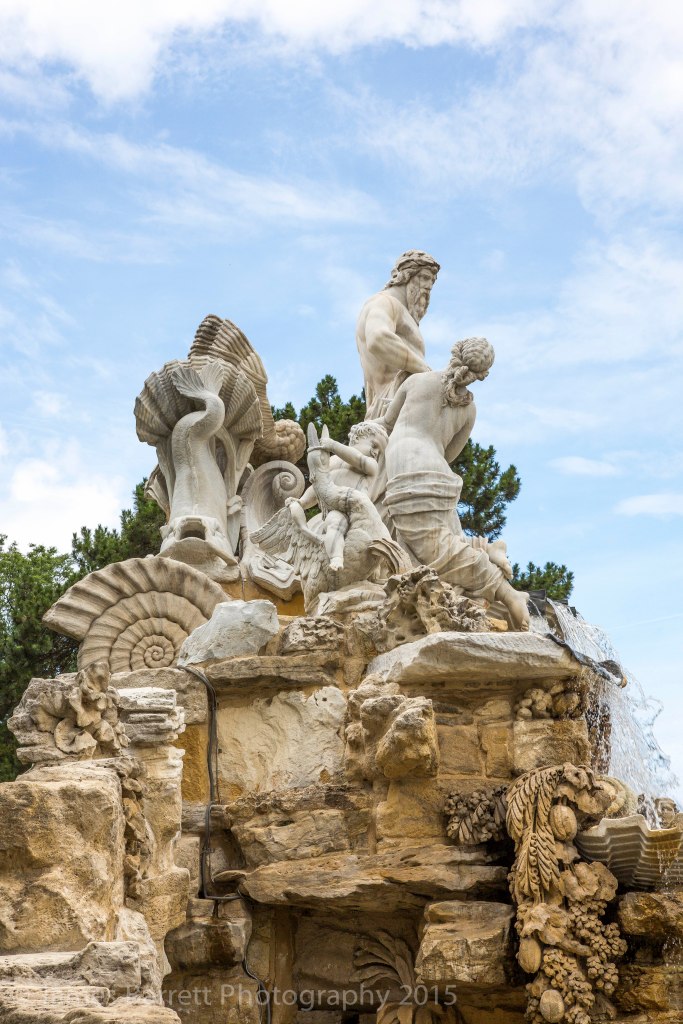 The Gloriette. Check out the link for details.

After a lunch and brief rest on board, we joined the group to visit Palais Pallavicini for supper in the 18th century Grand Dining Hall.

Before supper we were served a glass of champagne and serenaded with a Mozart Trio. I had enjoyed the violinist’ playing on our last trip.

Yikes! I think she recognized me! 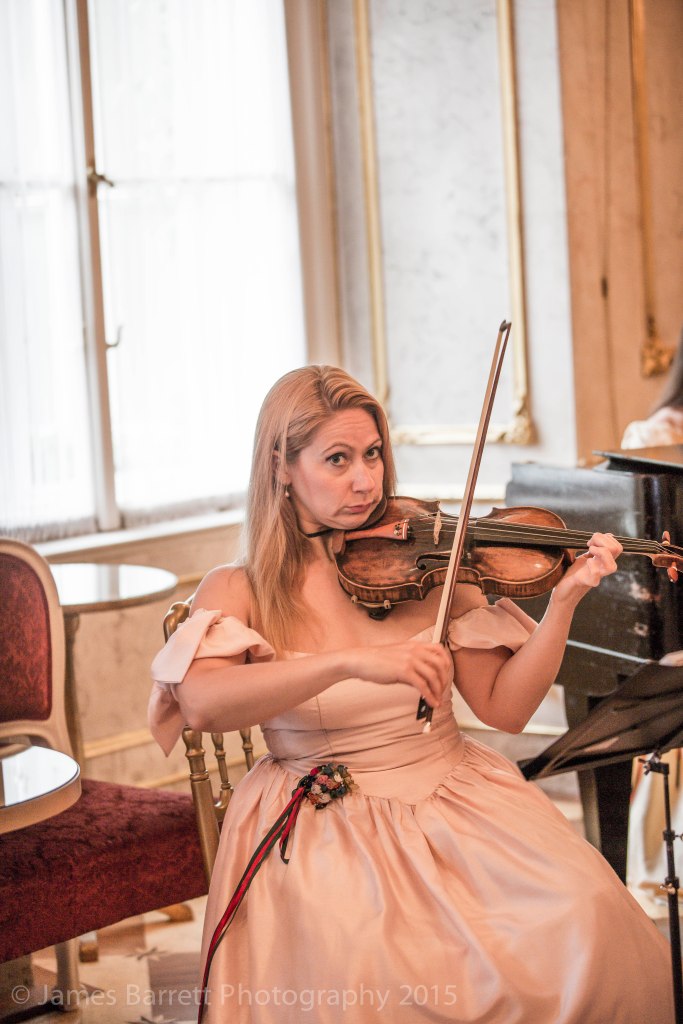 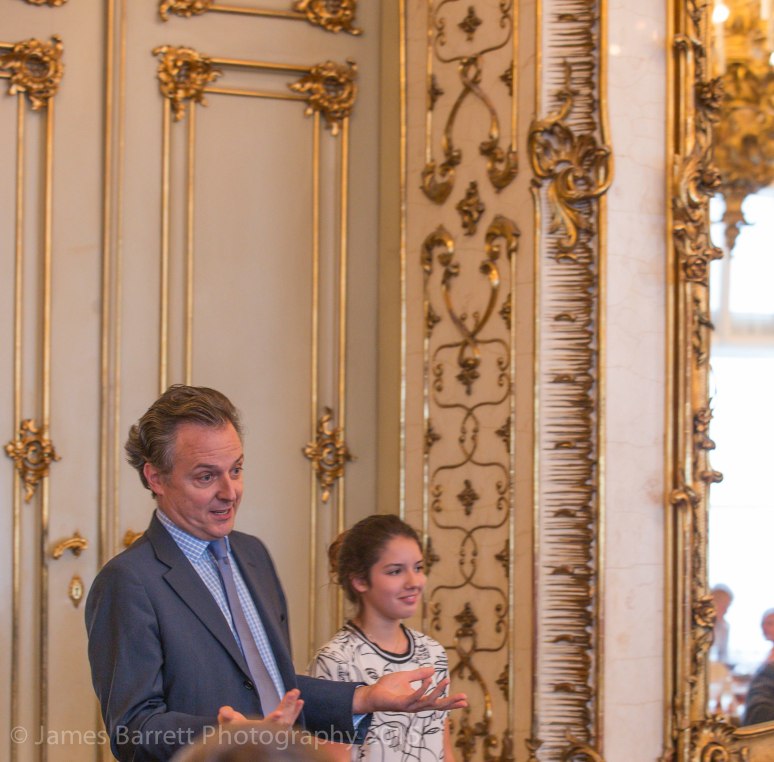 The Palais’ owner and daughter greeted us and explained the history of the building. Below is a shot of some of the rich detail.

I remember this gentleman from two years prior. He said that he has been working at the Palais for 25 years.

This is our daughter, Antje. I need to focus better! Below are our son Peter and his wife, Helga. 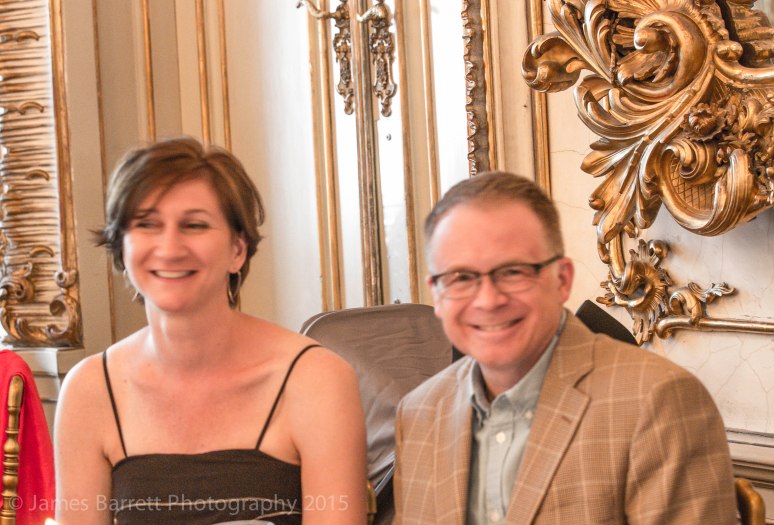 These are their children: Calvin and Tessa.

Next, the Scantzos family: Antje, Laz, Alex, Katie, and Demetrie.

And this is my love, Amy. 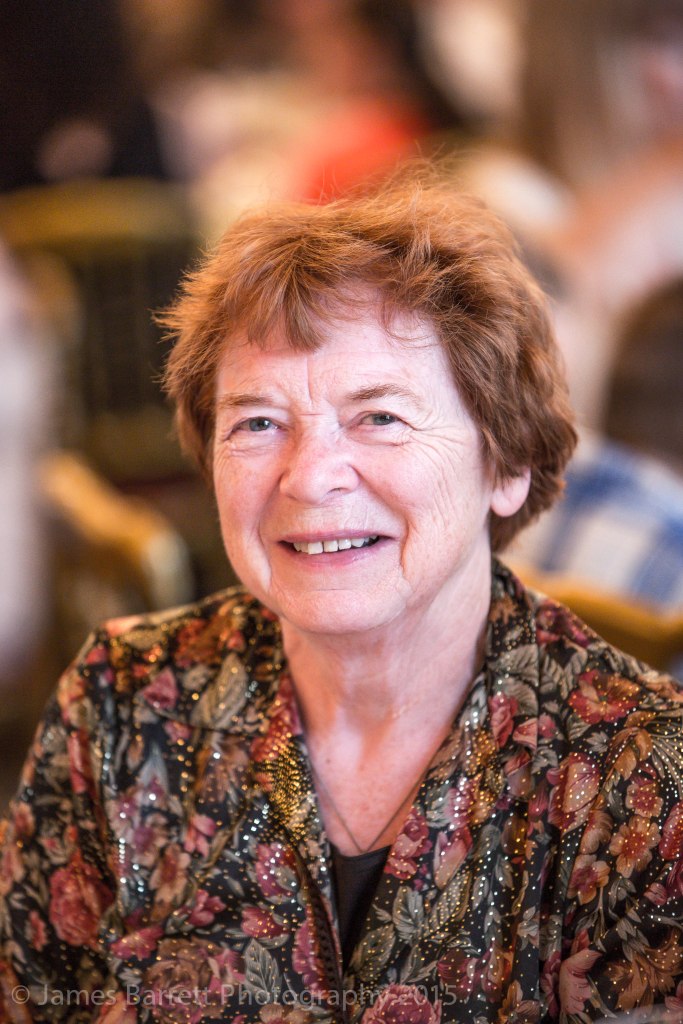 These are close friends, Bernie and Bruce Ilgen.

Here we are, along with our whole family, celebrating our 50th wedding anniversary which will be on August 28th.

We were regaled with music, ballet, and song. One of our young travelers was needed to play the triangle.

Mason was a hit, dancing to the music and attracting young ladies to ask for a turn.

We capped off the evening with one last fling, then called it a day. And WHAT a day it was! 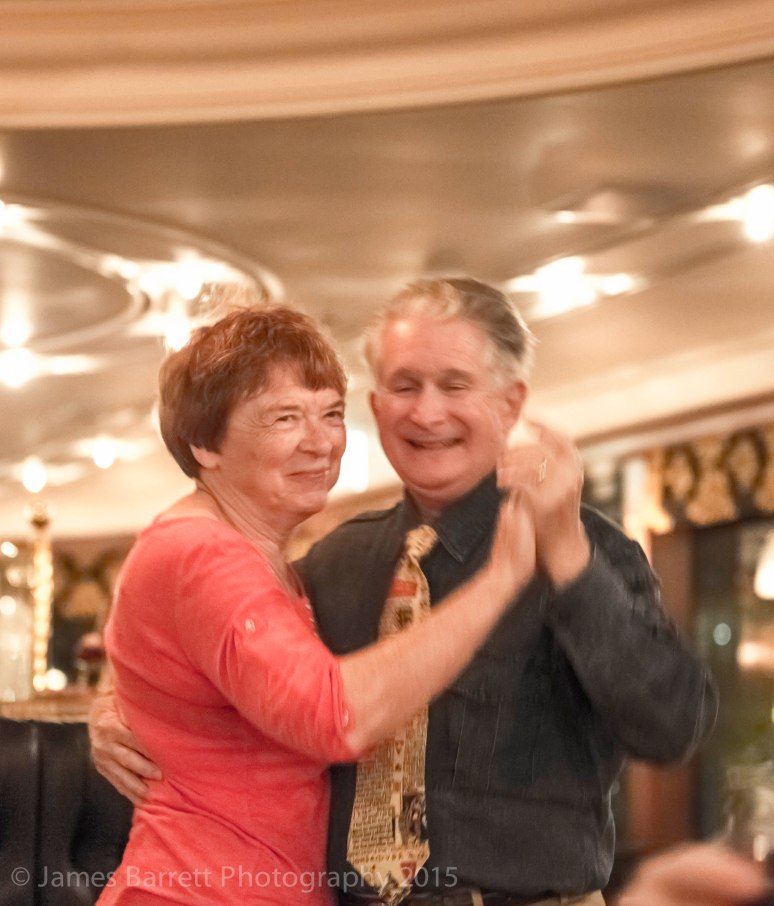