A LITTLE HISTORY:
Budapest, a union of Buda and Pest since 1873, can be traced to settlements in the Paleolithic era, as the river was narrow and afforded easy crossing. The Romans ruled the area for 400 years, followed for the next 300 years by the Goths, Logobards and Avars. Ancestors of modern Hungarians migrated from the Ural mountains in the ninth century; the basis for modern Hungary was established by Istvan I (Stephen I) who was Hungary’s first crowned King, and officially accepted Christianity for the Hungarians. Stephen was canonized in 1083, and is represented by a modern statue next to Matyas Church on Buda hill.

Under the reign of Matyas Corvinus in the 15th Century, Buda reached a zenith which was interrupted by the invasion of the Turks who ruled Buda for 150 years. Ottoman rule came to an end with the liberation by the Christian armies of the Habsburgs, a dynasty which ruled much of Europe from the 13th to the early 20th centuries.https://en.wikipedia.org/wiki/House_of_Habsburg.
The slow modernization of Buda and Pest are attributed to Maria Theresa (1717-1780) and Archduke Joseph. The slow pace led to an uprising in 1848 which was crushed by Franz Joseph (1830-1916) and led to the formation of the Austro-Hungarian Empire in 1867 after which economic and cultural life was once again improved. <a href=”https://en.wikipedia.org/wiki/Franz_Joseph_I_of_Austriahttps://en.wikipedia.org/wiki/Franz_Joseph_I_of_Austria<a
The Habsburg Monarchy fell after World War I, Hungary lost two thirds of its territory; attempts to regain lands led to its support for Germany in World War II. Russia took control of Budapest in 1945, but Communist Rule led to the student led Velvet Revolution in 1956 in Wenseclas Square. Free elections were held in 1990 resulting in a democratically elected government.

One of my goals in visiting Budapest before the cruise started was to photograph architectual elements of its history still visible. We hired a delightful guide, Oliver Rakaczky, whose assignment was to take us to sites which remained of its Medieval past, its Gothic, Rennaissance and Neoclassical periods, evidence of the Turkish occupation, places remaining from the Habsburg rule, the Historical and Secessionist movements, and the modern Budapest frequented by its youth. I had arranged for a private tour guide to take us to the sites which would exemplify the various historic eras of Budapest.

We had four hours together and Oliver managed quite admirably to satisfy our wish list, telling us interesting vignettes as we went from place to place. It turns out that the Royal Palace and Matyas church represents many of the eras in the development of present day Budapest. We visited a bath house built at one of the many sites of geothermal springs; while known to the Romans, these bath houses  were started by the Turks in the 16th century and dot the city. The Neoclassical Chain Bridge (1839-49) and the central Lutheran Church (1799-1808) are iconic landmarks. The Historical Movement (second half of the 19th Century) is represented by the Royal Palace, Parliament, Fisherman’s Bastion, and The Hungarian Opera House. The Secessionist Movement is represented by the Gresham Palace, now a Four Seasons Hotel. While walking back to our Hotel, we passed masses of young people, both in the park adjoining our hotel and in the many cafes, enjoying alfresco dining.

So in this one information packed tour of the city, we saw and photographed an historic capsule of Budapest.

The Palace is guarded by a mythical bird, the Turul, marking the millennial anniversary of the Magyar conquest in 896, seen off to the right in the picture above. http://hungarianhistory.freeservers.com/magyars_conquest.html 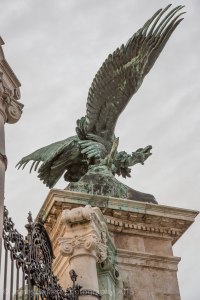 Standing in front of the Royal Palace is a statue of Prince Eugene of Savoy, commemorating the 1697 battle which was the turning point in the war with the Turks. One of two Turkish prisoners can be seen to cower by the feet on the prince. https://en.wikipedia.org/wiki/Prince_Eugene_of_Savoy 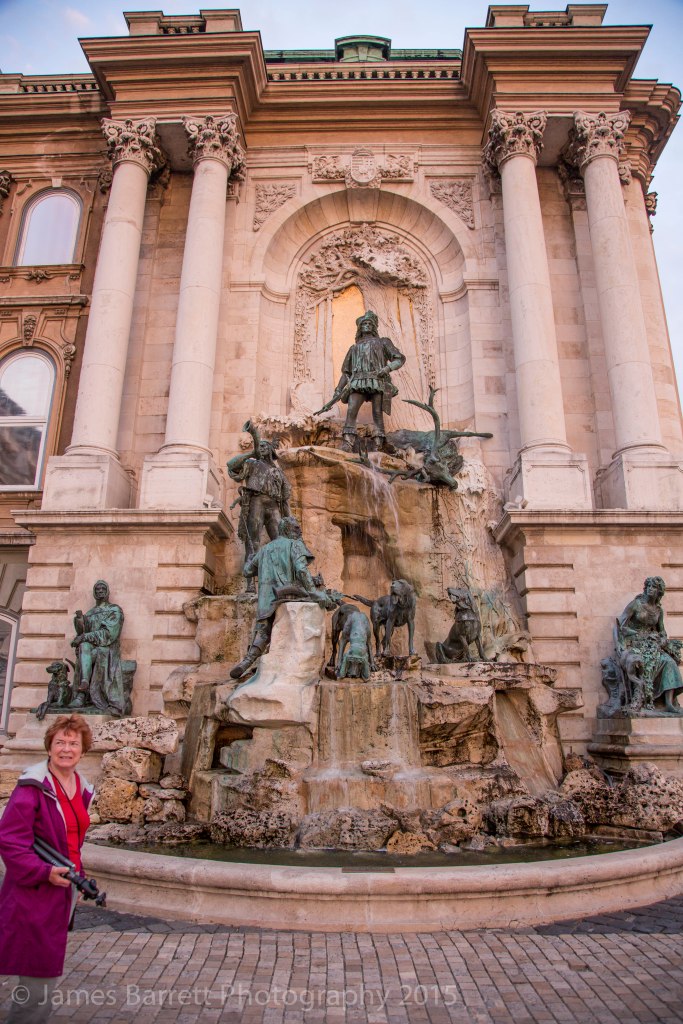 Just to the right of the fountain is the Lion Gate, the entrance to a rear courtyard of the Royal Palace. The plaque above the gate memorializes Maria Theresa.

To the left of the Palace is the Hungarian National Gallery.

A short walk behind the Palace brings us to excavations revealing foundations of early palace structures,

and the Raven Gate. From Trip Advisor:”The Silesian Annals state that when a raven carried off a ring King Matthias had removed from his finger, Matthias chased the bird down and slew him, retrieving the ring, and in commemoration of this event he took the raven as a symbol for his signet sign.” 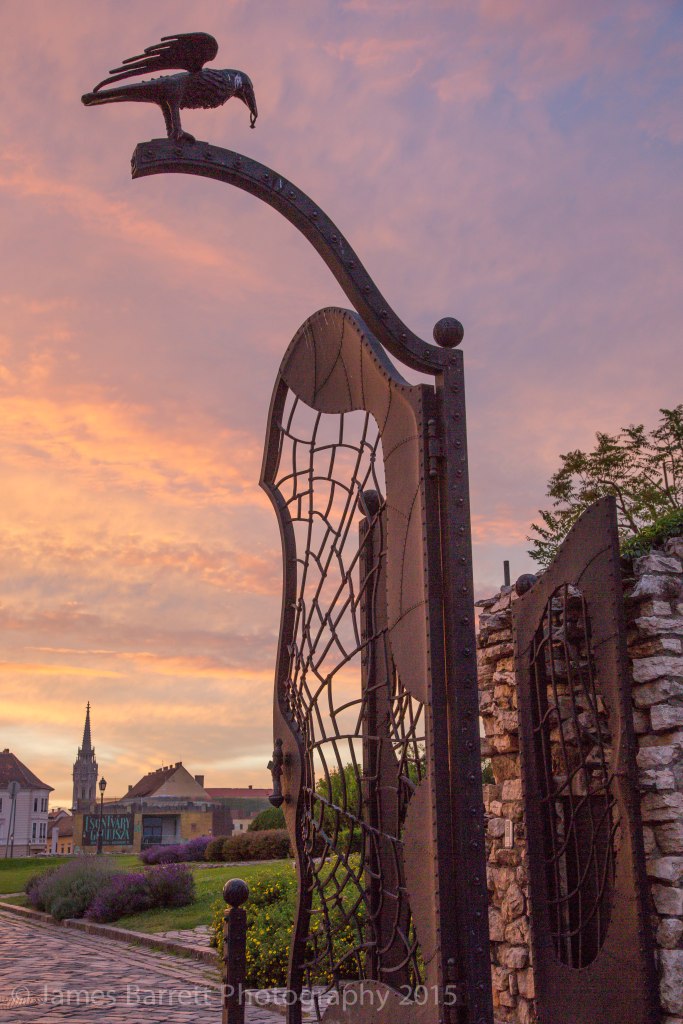 I was surprised to learn that Budapest, like Iceland, experiences geothermal hot springs, an attribute of tectonic activity. The numerous hot springs deliver 18 million gallons of mineralized water a day. The Szechenyi Bath, the largest bathing complex in Europe, has the hottest water and is available in this Neo-Baroque building,  . 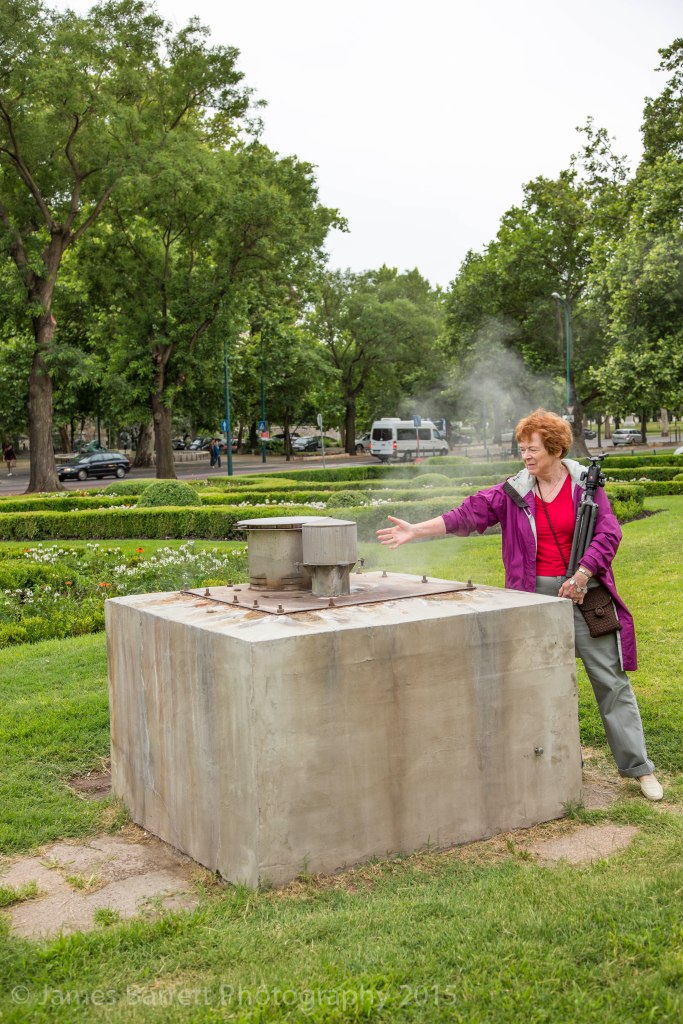 Virtually nothing remains of Gothic architecture characterized by pointed arches as seen in the Main Portal of Matyas Church. 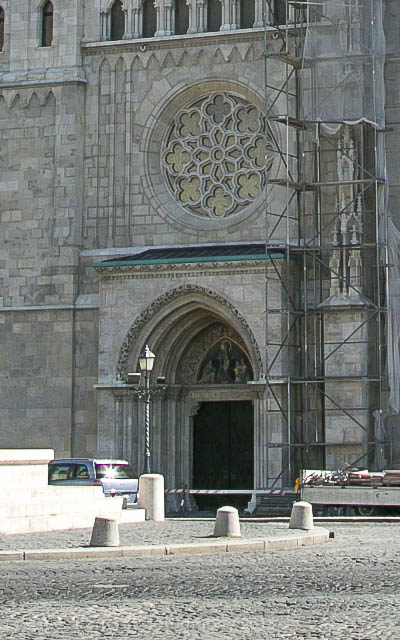 St. Anne’s Church ( 1740-1762) is an example of one of the finest late Baroque buildings remaining after World War II. Its architecture was influenced by southern German Baroque at the time of Habsburg rule.

In 1781, an edict was passed permitting the construction of Protestant churches, though many had previously been constructed. The most common architectural style of the time was that of Neo-Classicism. The first church to be completed (1808) was the Lutheran Church.

Another iconic Neo-Classical structure is the Chain Bridge, the first bridge to be built over the Danube River to connect Buda and Pest. https://en.wikipedia.org/wiki/Chain_Bridge_(Budapest)

The Calvinist (Reformed) Church (1893-96) is an example of a neo-Gothic style building built during the resurgence of Protestant church construction. http://cannundrum.blogspot.com/2014/04/buda-calvinist-church-budapest.html 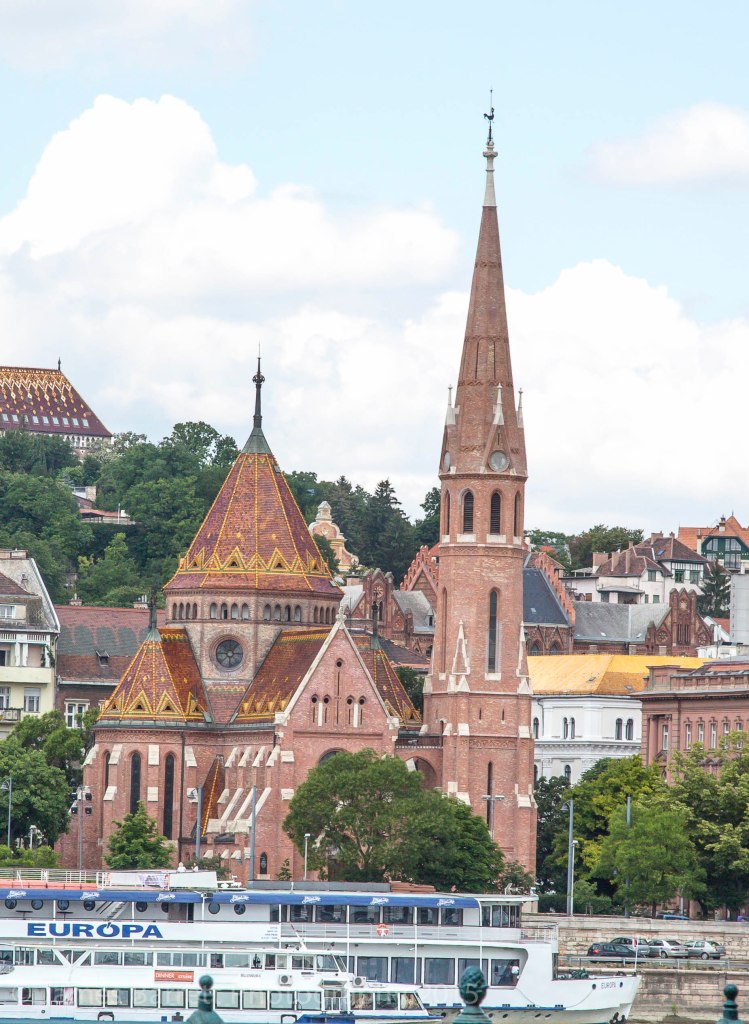 However, the zenith of Neo-Gothic style was to be embodied in St. Stephen’s Basilica which was started in 1845, and after the collapse of its dome and the death of two architects, and finally finished in 1905, incorporating Renaissance-style features. https://en.wikipedia.org/wiki/St._Stephen%27s_Basilica 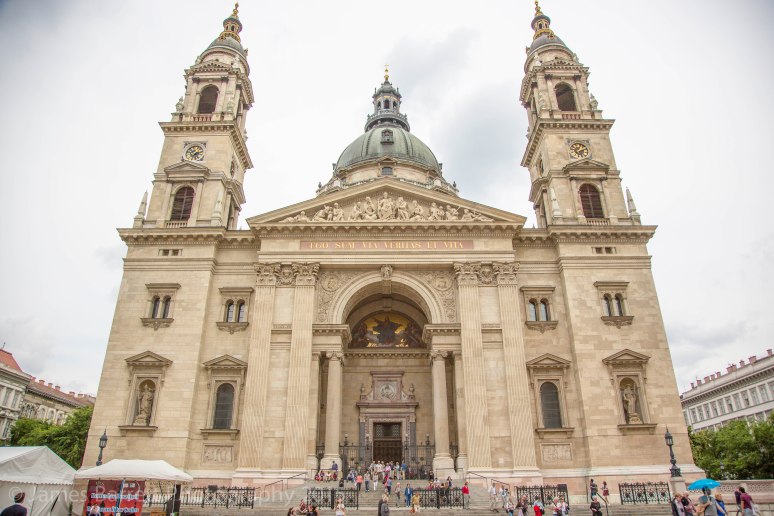 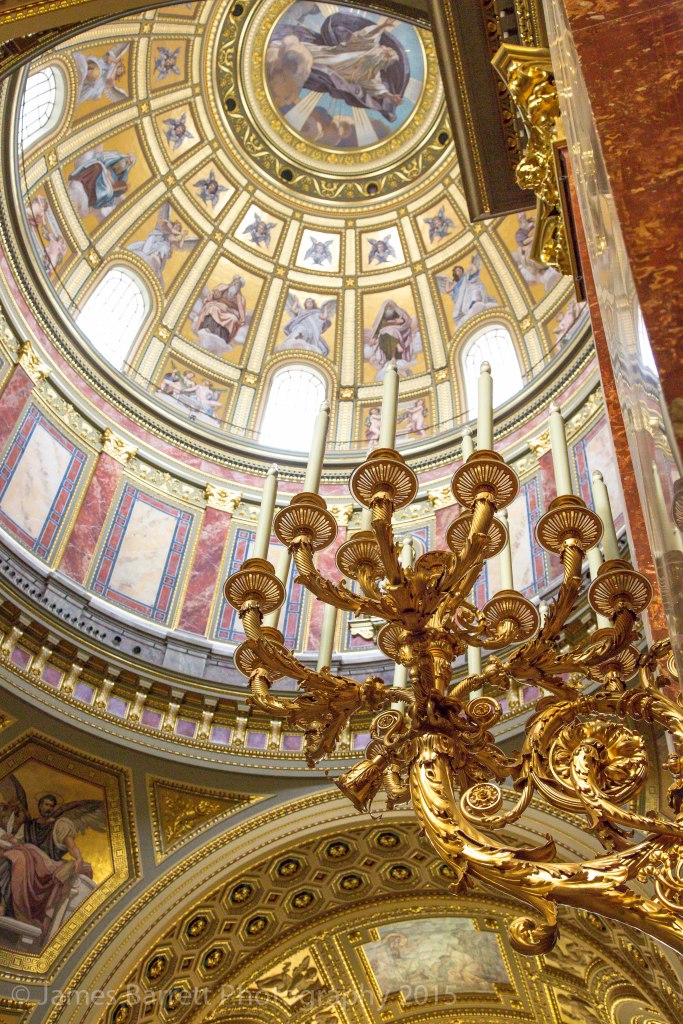 Another Neo-Gothic masterpiece is the Parliament, Hungary’s largest building, built between 1885-1902 and styled after Parliament in London. https://en.wikipedia.org/wiki/Hungarian_Parliament_Building 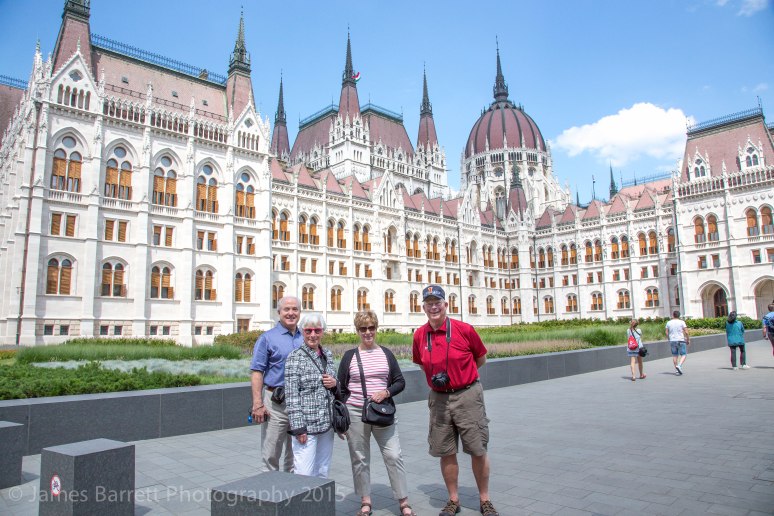 The two couples shown here are close friends – intrepid travelers – who came along with our family on this trip.

The second half of the 19th Century, after unification of Buda and Pest, architects borrowed from various genres to produce  the final version of the Royal Palace and the Hungarian State Opera House https://en.wikipedia.org/wiki/Hungarian_State_Opera_House . Even the Neo-Gothic Parliament was given a Neo-Rennaissance dome, while the Fisherman’s Bastion (where a fish market once stood) https://en.wikipedia.org/wiki/Fisherman%27s_Bastion was designed with features of Neo-Gothic and Neo-Romanesque designs. The trend was “Neo”. 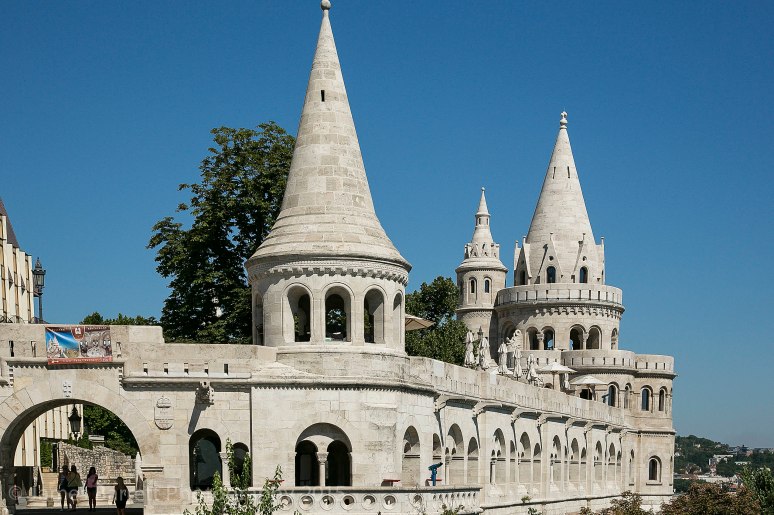 Finally, hang on, almost finished with this part, the Secessionist Movement which was started by avant-garde artists in Paris and Vienna  in the late 19th and early 20th century found expression in architecture, painting, interior design including wrought-iron work. Fortunately the Gresham Palace was within walking distance to our hotel. http://budapestbug.tumblr.com/post/40426382055/the-dreamlike-buildings-of-budapest-the

Our tour guide, Oliver Rakaczky, was helpful and most enjoyable in helping us to discover these architectural elements in the historical development of Budapest. Here is Oliver and Amy at Heroes Square built celebrating national pride at the millennial celebration 1896. https://en.wikipedia.org/wiki/Hősök_tere  The cars,  not allowed on the square,  proceeded to spin in circles producing a deafening screeching amid the acrid smell of burning rubber and smoke. 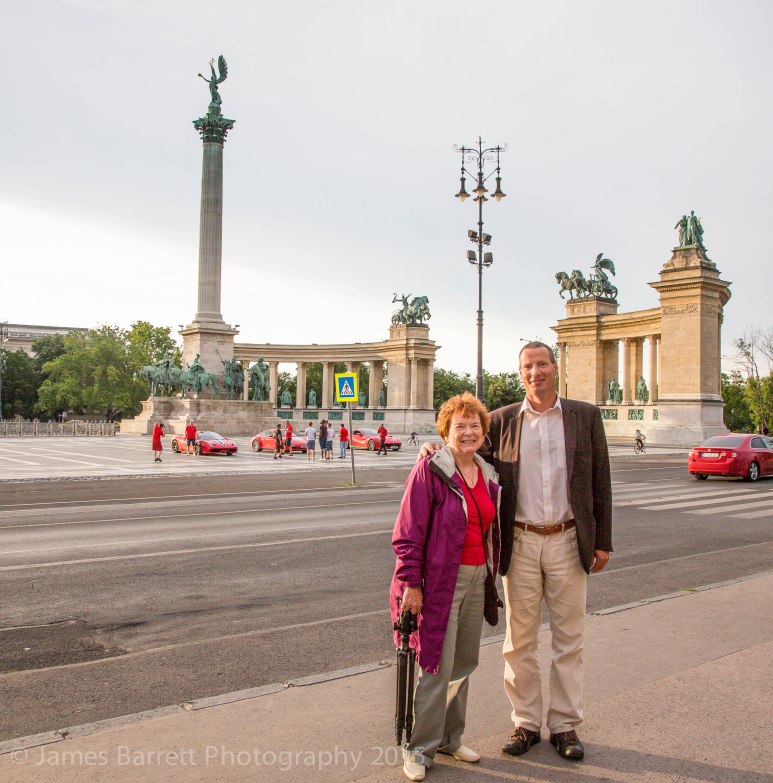 Standing with one’s back to Heroes Square, one can see the ferris wheel in front of our hotel at the end of Andrassy Utca (Street), see here from Buda at dusk.

I had taken a long exposure shot of the ferris wheel the night before. 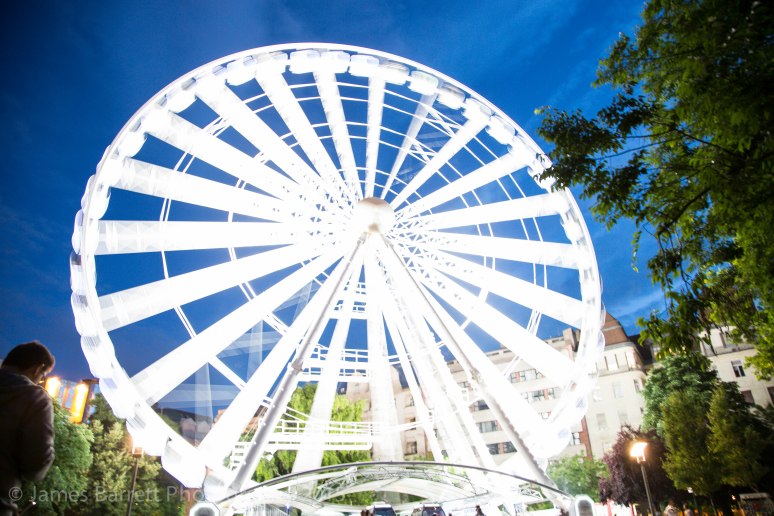 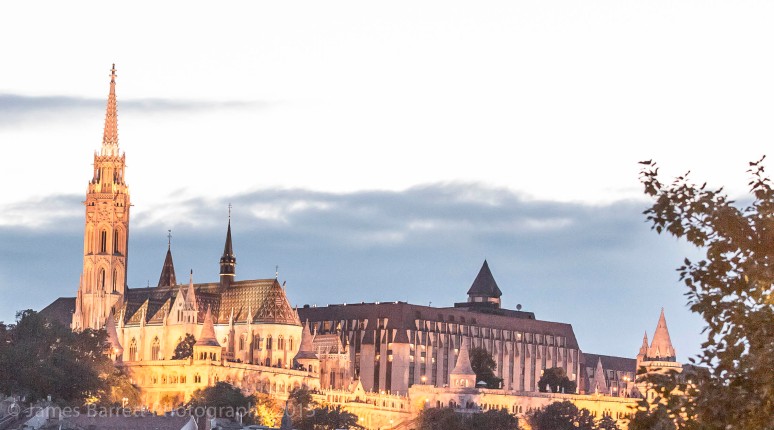 We enjoyed our two days in Budapest with Paul Tracie and Mason before the cruise started, especially the dining experiences.

On June 20th we were joined by the rest of our family, freshly off their flights, for a quickie tour of Budapest. I suspect some of these shots will be Christmas cards. 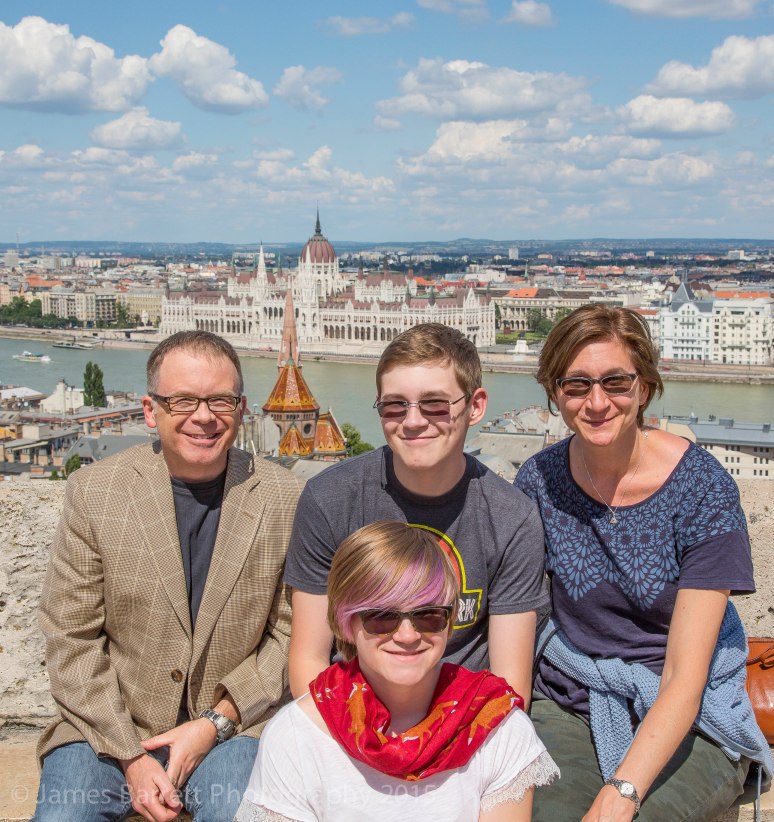 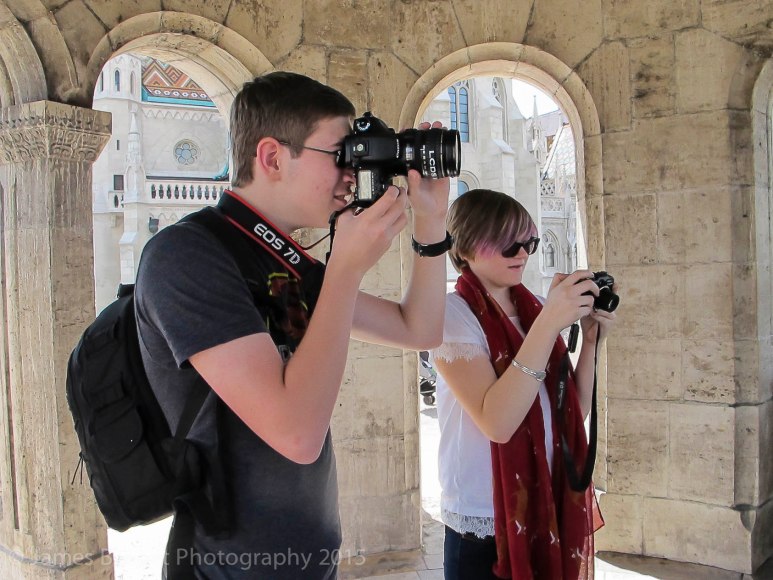 And the next phase was about to begin: THE CRUISE!